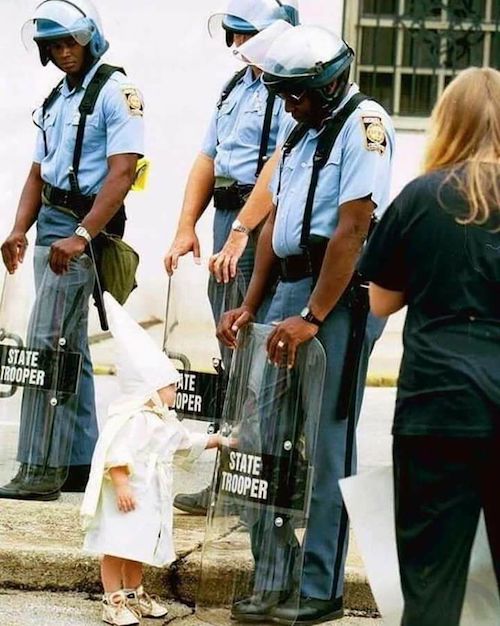 It’s the middle of the night and I can’t sleep. America is boiling and the image of a pressure cooker is reverberating through my head.

Have you ever actually seen a pressure cooker? Maybe it’s my sometimes over-active anxiety, but I’ve always had a fear of pressure cookers. I imagine their hot steal exploding like a car bomb, unable to take the pressure that causes the heavy lid to shake and crash against the pot.

Being afraid of Nazis is an old, familiar fear. When I was a little girl, in my south Florida neighborhood we would sometimes play a game called Nazis and Jews. It was really just a glorified game of hide and seek, mixed with a little bit of cops and robbers. My sister and I would be the Jews, of course, and the friend next door would play the nazis. I remember hiding in the back of her dad’s pickup truck in their garage, flattened down so as not to be found. It was just a game of course, but in my mind, I was in the history books in 1930’s Germany. I psyched myself out wondering how I would have really responded if I were really The Hunted and not just playing a childhood game.

But that isn’t what is scaring me right now.

Right now I am hearing the angry mob responding to the neo-Nazis at that rally in Charlottesville. The voices all over Facebook that said “F*ck them!” “We won’t give them power over us!” tonight. The counter protesters that I watched on video, getting up into the faces of the white guys, challenging them. To what, I couldn’t figure out.

But, friend, you have given them the power. And your voice is just as dangerous. Anger is a dangerous emotion. Anger combined with youth and passion, even worse.

When racial tensions are high like this, my mind always goes back to Daryl Davis. Daryl Davis is the African American blues musician who has a hobby of befriending KKK members.  Davis actually convinced 200 klansmen to leave the KKK by befriending them.

Thousands of people across the country attended vigils or counter rallies, in an attempt to show solidarity with their African American and Jewish friends. And at least one of them that I saw ended in violence.

And I am grateful that you are willing to spend your valuable time communicating that message. It’s important and it’s valuable. And I am not asking you to skip the vigil’s.

But please don’t think that it’s a solution. It won’t change a racist’s mind or heart. It won’t bring peace to our country. And what we need right now, isn’t a fight. We need peace. To get that, you have to do the hard things.

The thing is, you can’t solve this problem by addressing racists as a group. If you use your march or vigil to address the racists, to tell them that you won’t stand for their behavior, you’re doing what Trump is doing with North Korea. You’re sending out a battle cry. You’re making an “Us” and a “Them.” You’re giving a challenge and they will accept your challenge. Nobody wins that fight.

And please don’t forget…they are still us. They are still citizens of the less-United-than-ever States. If we respond to them in the same way they have treated us, we become like them.

Daryl Davis knew that harmful ideologies are best dealt with one on one. Nobody wants to hurt their friends. To get to the heart of a racist…

You have to befriend the racist.

Where I live in North Carolina, we have the opportunity to live amongst all kinds of different people, as the city stretches out to meet the countryside. And like in Charlottesville, it isn’t unusual to meet people of all walks of life, racist and not, in our daily lives. So go to your vigil and light your candles, but when that guy or gal in your office, or your neighborhood, or your religious community, makes a comment that you find reprehensible, don’t use that opportunity to shun them. Don’t exclude them from office banter or community. If you do, you will fuel the fire inside him that led to the hate in the first place. When people are ostracized and excluded, they seek out others like them. And in our modern techno-world, they are easy to find.

What I am asking you to do is hard. So imagine that baby. Someone who didn’t have a chance to see the world in a different way. You are giving him the opportunity to see the beauty of the world we live in. You are helping to take his blinders off.

I have had people tell me that it isn’t their problem to help these evil people see beauty. They aren’t family. They aren’t friends. We don’t owe them anything. They should figure it out themselves and if they can’t…what? Kill them? I have actually heard this as a reasonable solution. Solution. I don’t care how blind they are. Until they are pointing guns in my face in an attempt to kill me, the solution is never to eliminate the opposition. They are human beings.

It is our problem. It’s all of our problem. Because if we don’t address it, if we don’t work toward peace, no one else is going to do it for us. We won’t have a country to hand to our grandchildren. Haven’t we had enough already?

Yes, you are in the right. Yes, the racists are in the wrong. But is it more important to be right or to have peace? Do you believe people can change? Daryl Davis proved they can.

I’m not saying to surround yourself with horrible people. That would be a miserable life. (And I hope it goes without saying that you shouldn’t ever put yourself in danger or in an unhealthy situation.)  What I am saying is that we should be purposeful in being tolerant to people who are different than us. And that means not only different good, like different color, religion, etc. But also different ideologies that might not be something you want to emulate. If people learn from example, where will they find an example if no one wants to play with them?

Throughout the day as I was writing this post in my spare minutes, there was a Facebook thread about Charlottesville that I was a part of. There was one person on the thread that was so vile, so angry and so aggressive that my instinct (as I wrote this post, mind you) was to say she should be blocked. I do recognize that there are some people who will never change. I know that sometimes, people simply won’t accept the olive branch. But I think we need to consciously weigh the idea that saying there is no hope and cutting someone off has consequences that we may not have considered. We make those decisions too lightly because we have forgotten what real conflict is like. Maybe we’ve had it easy for too long. I’m not saying that sometimes people don’t need to be cut off, I’m just saying that we should be careful to make those decisions, not out of pride or arrogance (If you feel like you can’t stand not being right, that might be a hint that your arrogance is speaking) but out of the need to protect yourself, whether your mental or physical health.

So do the hard things. Be the light. Befriend the other. You might surprise yourself.