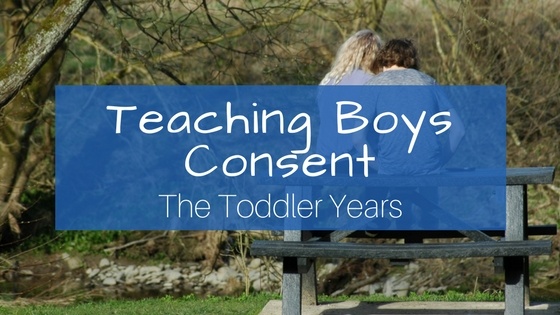 I ran across an article on Facebook today. It was about teaching teenage boys about consent. And in the afterlight of #metoo, it’s a pertinent conversation.

As the mother of two teenage boys and another boy on the heels of tweenhood, this is very relevant to my current phase of life. But the thing that always crosses my mind when I hear advice like this for the moms of teens is — my boys KNOW about consent. They understand boundaries, they know how to treat other people. Why is this a new conversation I need to have now? We’ve been talking about this since they were babies.

And then as I was scrolling through my news feed, a post from a mother’s group slid across my path.

The post has been deleted…I’m sure she was taking a lot of heat for it (shame on you moms…we’re all learning!) But the gist of it was this:

A mom wanted advice about how to handle her two year old who was having a hard time with sharing. Anytime she would ask her child to share a toy, the child would have a temper tantrum. Mom tried everything…time outs, spanking (which I’m not talking about today), leaving the play date if the child wouldn’t share. Nothing was working.

Imagine this: You are at work and you are using a piece of equipment for a project. It can be anything…a pen, a stapler, a camera, a 3D printer. It doesn’t matter how complex or simple the object is. All that matters is you are fully engaged in your task. And you haven’t completed your task yet.

Now imagine that your boss approached you and said you’ve had that [object in high demand] long enough. Please give it to Jimmy. You say, “No, I’m not done. Jimmy can have it in about an hour. I’ll be done then.”

Boss man says, “Nope, sorry, you’re done. You’ve had it long enough. Give it to Jimmy.”

Do you see where I’m going with this?

We forget that our children are human beings. They have a will and they have a purpose. They have skills that they are honing. When they play, their brain is quite literally, growing. They may not be able to articulate what they are learning, the task they are trying to complete or when they will be finished. But play IS their work. It is as important to them as any goal you try to accomplish on a daily basis.

We expect our children to “share” and even though we don’t understand their play, their purpose and their goals (because they can’t articulate it at such a young age) we set ourselves up as taskmasters and forget that our goal isn’t to get our kids to share, it is to teach them to nurture relationships. Sharing (and respecting other’s boundaries) is the natural outpouring of a healthy relationships. And THAT is the goal in parenting.

So what would that look like in this scenario?

Well, with my kids, we never demanded they relinquish a toy they were using. Our rule was, if you want to use a toy, you don’t take it from someone without their permission, (i.e., consent). You ask for permission to use it and accept their decision to share or not to share.

Then, with the child who has possession of the object, we taught them that when they were finished using it, they should find the person who wanted the toy, let them know when they were finished and the other person was free to use it. In almost all cases, the issue isn’t that the child doesn’t want to share, they just aren’t finished using the object. (Of course there are some kids who simply don’t want other people using their stuff, but that’s a different conversation.)

Training them to find their friend or sibling once they were done, and then using appropriate language (Would you like to use it now? I’m all done!) took some time and effort on my part. But my kids LOVED this system. They never felt violated when forced to give up something without their consent. And while for the child who has to wait, yes, it stinks to not be able to take something that you want just because you want it…but that’s life. And that’s what it means to respect other people’s boundaries and to not take something that doesn’t belong to you without consent.

These lessons continue as the kids grow older. Kids need opportunities for personal autonomy, to make decisions, even bad ones, and learn from them.

Consent can’t be taught in a vacuum at an age when it finally starts to have dire consequences. It begins with their very first steps when a toddler is finally able to assert his or her will on his surroundings. And we can model consent by allowing our children a say in what happens to them as soon as they are able to communicate their needs to us.

One last thought, that should go without saying, but I’ll say it anyway. Girls absolutely need to be taught consent in the same way boys should be as I’ve laid out above. Historically women haven’t reacted with similar violence as men have when they violate someone else’s right to consent, but that doesn’t mean that it is any less valuable for girls to learn to take things that don’t belong to them only with consent.

Have you had trouble with your kids sharing? How have you handled it?